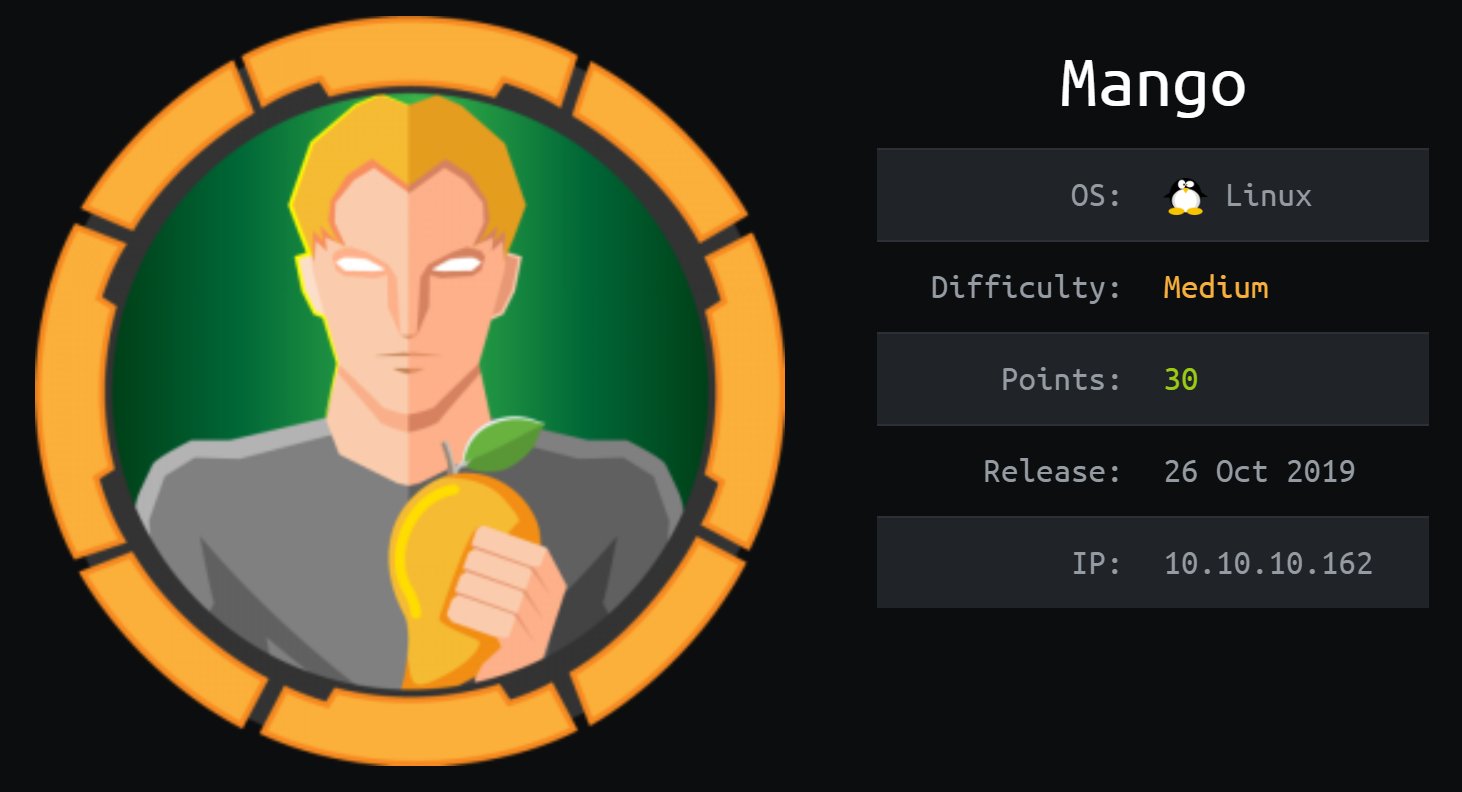 Mango just retired today. I had lots of fun solving it and I finally learned about NoSQL injections. Its IP address is ‘10.10.10.162’ and I added it to ‘/etc/hosts’ as ‘mango.htb’. Without further ado, let’s jump right in!

As always, a light nmap scan was enough to get me started:

However, port 443 returned a funny clone of Google called ‘Mango’:

Before testing this app for vulnerabilities, I mad sure the HTTPS certificate couldn’t be used to find other domains:

The script discovered a sub-domain, so I tied accessing it. However, the page was identical to the one I got before:

After searching round for a bit, I realized I haven’t accessed the new sub-domain via HTTP yet. I did that and discovered a new sub-domain:

Since the machine name is Mango, I though that the backend database engine is almost certainly MongoDB. I used this cheatsheet to test for a possible NoSQL injection, and I found one :). I then tried logging in with multiple usernames and found that ‘mango’ was a valid one. The script below gave me the password for that user:

After letting it run for a few minutes, I got the user’s password:

I used ‘h3mXK8RhU~f{]f5H’ to log in to the application and I got the following page:

I tried seeing if there is any user named ‘admin’, and there was. His password might come in handy, so I used the same script to get his password (I just changed the username variable from “mango” to “admin”):

However, the admin page looked exactly the same:

After a bit of playing around, I tried to log in with SSH using the website credentials. It worked, but only for the mango user:

There was no ‘user.txt’ file, so I enumerated the users on the machine:

There was an user called admin, so I tried using su to pivot to his account (I used admin’s web platform password):

Exploiting jjs to get root

Once I submitted the user proof, I started enumerating the machine again. While reading through the SUID binaries, one stood out:

I didn’t know what ‘jjs’ was, so I searched Google and I found the following explanation on Oracle’s site:

The jjs command-line tool is used to invoke the Nashorn engine. You can use it to interpret one or several script files, or to run an interactive shell.

The first two characters of the root proof are ‘8a’ 😉