Building a Voting System with Python 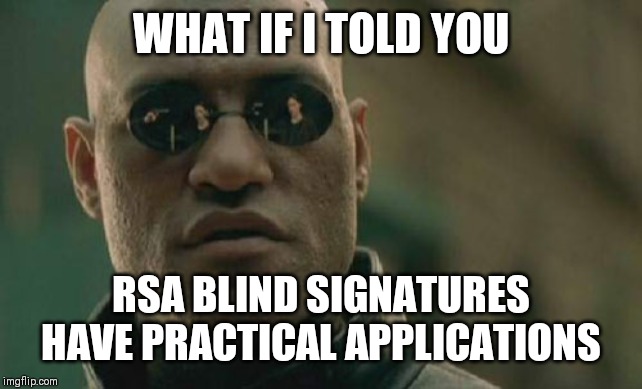 What if you could vote the next president of your country using an app on your phone?

In this article I’m going to build an online voting system. It is mostly based on this paper, but it’ll be slightly modified. Also, in order to fully understand this article, you need to know the basics of RSA. For this, I recommend my last article.

There will be 3 programs:

If we do everything right, the voting process will be anonymous. Also, we will weight the pros and cons of online voting at the end of this article.

0.5. Is this approach anonymous?

We are going to need a RSA keypair to sign all the votes. The public key will be hardcoded into the client and storage server software, and the private key will only be held by the validator server. We can generate it with the following Python script:

I’ll paste the generated public and private keys below (of course, yours will be different):

Also, here’s a useful one-liner that will generate the variable declarations of the key:

As I said before, the validator server will blindly sign one vote for every eligible voter. The validator cannot tell a blind vote apart from a random number, so a voter that sends an invalid vote will loose his/her ability to vote.

I believe the code is pretty readable and easy to understand, so I’ll just paste it below:

The counter server is even simpler than the validator server. After it receives a signed vote, it verifies the signature and add it to an array if it is valid. I also implemented a stats function that returns the current umber of votes for every option:

In a real-life scenario, this would be a website or a mobile app. However, in order to keep thing simple, we will code the client software in Python.

First, we need to import the required libraries:

Then, we need to hard-code the voting options. This is more secure than fetching them from another server every time (and is also more simple to code!).

We also need to set the addresses of the API point we will be using In my case, the validator and counter servers will be running on localhost, or 127.0.0.1.

The getSignedVote() function will take the voter name and choice as arguments and will return the signed vote. This means that it needs to blond the vote, talk to the validator server and then unblind the signature:

We are also going to need a function that will submit the data to the counter server:

Also, it would be nice if we could print the vote count to the user after he/she voted:

The next function makes sure that the integer representation of a vote is not the same between participants by adding a seed:

Now that we have all the required methods, let’s see the main code:

Now that we have a working system, let’s test it. First, we need to start the validator and counter servers. By default, they will listen on localhost on ports 1111 and 2222.

Now, let’s go to vote! Remember, only usernames that start with yakuhito and end with a number from 0 to 99 are allowed to vote. Let’s first try an invalid name:

The validator server rejected our vote because our username wasn’t whitelisted. Let’s now try voting with a valid username: 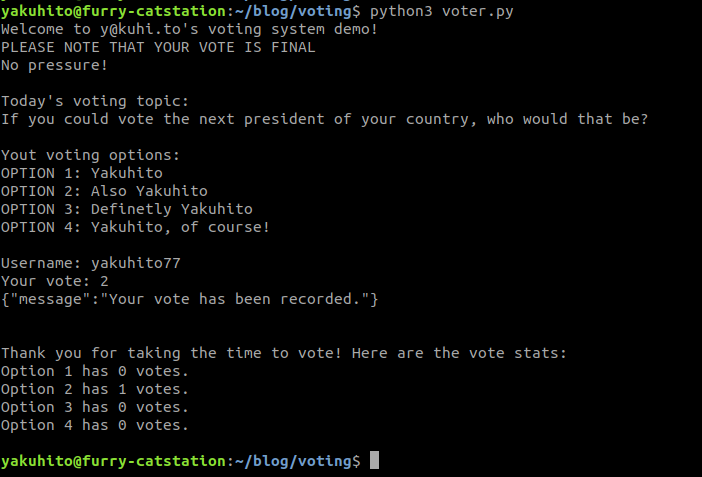 Our vote was recorded. Let’s try to use the same username again:

The validator server rejects our vote again. This is because no voter is allowed to change his vote or vote twice.

Here’s a short list I made of things that need to change in order to go into production (a.k.a. use the system in a real-world scenario):

While using software to vote might be less secure, it’s still an option to consider. In this article, we saw that it is relatively easy to implement such system. However, it is also hard to protect it against viruses. The program works in theory, but what if malware intercepts your request and modifies them so you vote for another party? Making it available on mobile phones only is more secure, however, it is still insecure.

EDIT: You can find the code here and ask me questions here.